Ok, I haven’t been played this here before, but after our ‘to/in reply’ messages via Twitter, Mr.Real PJ tagged me to reveal eight random facts about me. So, they will not be “that” short, rather short-story like, as I am passionate about writing (short stories, notes -written word in general). I hope you’ll find them interesting. A tiny bit and byte(s) from me. At the end of the eight secrets, there are the names of eight people who will do the same.

1. I grew up with music – jazz. Blues. Classics. Fusion. Rock. Punk and more… Father, as professor, travelled a lot, and I was raised under variety of great musical influences. Also sang and played piano. And failed attempt to play the trumpet. And imitate Maria Callas. I was shouted down after M.Callas attempt, forever: ) I moved to Ella Fitzgerald. Still sing for those who can bear my singing. Joke: I sang 9 years in school choir.

2. Four years after Tito’s death, in primary school I wrote a poem that won a ‘prize’ and was published in school newsletter. I was honored as ‘good pioneer’. My first short story, at the age of 17, was “the best short story” published in Anthology of best short urban stories of Belgrade. I wrote it in masculine gender to mislead and trick the chauvinists (during that time) jury board. I succeeded.

3. Started with English classes at the age of 6. Not to mention that I read Ulysses by James Joyce at the age of 14. Twice. Old fashioned librarian made me a problem and called my mother to report that ‘this child will read “heavy material” for her age”. My mother gave permission. Later on, I read “The Fear of Flying” and Anais Nin stories. No-one rejected.

4. Also, in the early days, I was promised by my father to get a real bicycle, but instead, I was walking downtown and saw first Commodore 64. I instantly fell in love and forgot about bicycle. First signs of my geekiness.

5. I was about twice to get lost from the face of Earth during flying: once over Chicago -> severe T-Storms (coincidence, it was on Aug. 2nd) and over Texas – tornado, but I never give up flying later on. I still enjoy to fly and like airplanes as well as thunders. Smithsonian’s Air and Space Museum one of my fave.airplanes museums where I can spend whole day.

6. I swam in the cold ocean water during the winter and walked on the wet sand on the beach (east coast of US, Wilmington), as well as on the west coast (La Jolla). In front of my apartment there was eucalyptus tree. Used to go after midnight to Coronado island to watch the beauty of the city lights of San Diego. I loved to eat at Trader’s Jo supermarket with organic food.
7. I adore East and West Franklin street in Ch.Hill, and people in Ch.H. in general. I participated in Halloween Franklin St. party, went to Kitty Hawk anniversary-Brothers Wright, was outside on the balcony during the hurricane, Tar Heel taxi driver gave his baby girl name after me, I liked to hang near Peppers pizza or Wine bar (if it’s still the same name), during weekends at Carrboro open market, listened to live music and ate cinnamon cake, was frequent visitor at Spartacus -Greek restaurant between Durham and Ch.Hill, and adored small squirrels on the path to SILS building.

8. This one is about the one who tagged me: I was stunned and impressed by his presence and energy. I waited for 15-20 minutes, he was late. Running. But then, “pure energy” opened the door of the creative chaos messy room with huge poster of Johnny Cash (I wonder if it’s still on that wall hanging). He had all the gadgets around (Treo, Mac, one, two, three, etc.), multitasking and listening to me. I was impressed as his consultations (mentor) lasted 1.15 hrs/min, more than the lecture of any professors here (or there I’ve ever met). He talks and laughs like cute cartoon character. Unique voice. Smart, cool person. Sometimes forgets to reply on important emails: ) 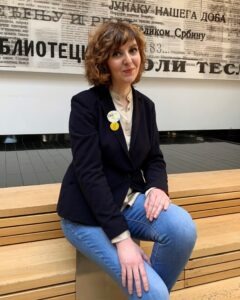